Catholic Churches for a Wedding in Greece 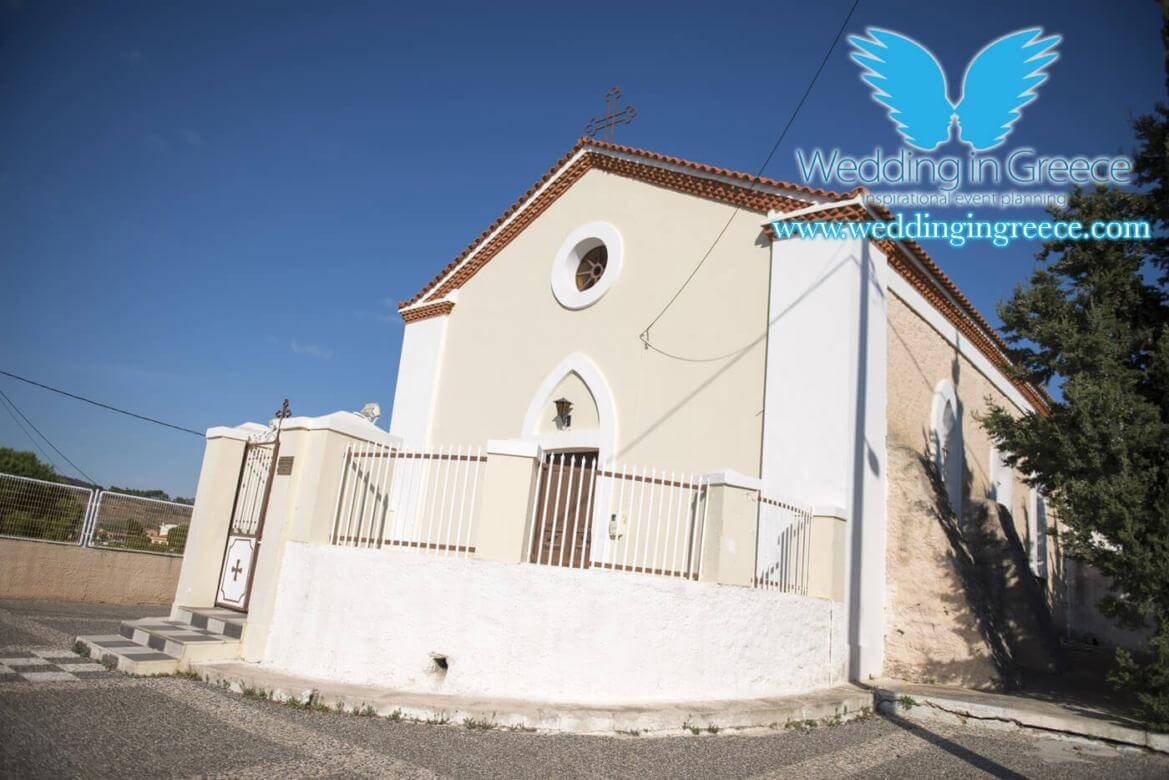 More than 200,000 Catholics live right now in Greece. Located mainly in Athens and Cyclades, Catholics have the right to be part of the Roman Catholic Church and they are free to express their religious standpoint. A big part of this community is dispersed all over the country. Catholics are either indigenous or immigrants from Eastern Europe. Besides the Roman Catholic community, there are also Greek Byzantine Catholics (5,000), Protestants (20,000), and Armenian Catholics (20,000-35,000).

A Catholic Wedding in Greece is a verified ceremony that can be performed legally by all Catholic Bishops. The Bishops' Conference of Greece has defined 9 Catholic Bishops all over Greece.

Archdiocese of Athens - The Cathedral Basilica of St. Dionysius the Areopagite:

-The history: One of the oldest bishoprics, the Archdiocese of Athens has been established in the mid-1st century AD. It has been through massive catastrophes during the Crusaders’ and Ottomans’ invasions but was restored on 23rd July 1875. This archdiocese includes the cities of Attica, Peloponnese, and Central Greece. The seat is the neoclassic Cathedral of St. Dionysius the Areopagite.

-The church: The Cathedral Basilica of St. Dionysius the Areopagite is located in central Athens, at Panepistimiou Avenue. It is considered one of the most beautiful Catholic Churches in Greece. The eight stained glass windows that embellish the church, the stone structure, and the marble columns create an aristocratic environment. The convenient location and the classy architecture are the advantages of an amazing, elegant wedding ceremony.

Archdiocese of Rhodes - The Cathedral of St. Francis of Assisi

-The history: The Archdiocese of Rhodes is located on the island of Rhodes since 1928. During the years of the Ottoman Empire, it was turned into a mosque. Due to the fact that the majority of Catholics, in Rhodes and generally in the Dodecanese, are not indigenous, all the ceremonies and sacraments are performed in a multilingual manner. The seat is the Cathedral of St. Francis of Assisi.

-The church: The Cathedral of St. Francis of Assisi in Rhodes is a complex of three building parts, the church, the bell tower, and the monastery. It is located in the city of Rhodes and is the Catholic Cathedral of Rhodes island. The church has a basilica style and it is the amalgamation of different materials. Stone, marble, onyx, and monolithic blocs combine to create a majestic architectural result. The amazing location and the great structure compose the ideal background for the ceremony and the wedding photographs.

Archdiocese of Naxos, Andros, Tinos, Mykonos - The Cathedral of Our Lady of Rosary.

-The history: This Catholic Archdiocese was established in 1919 (as the Archdiocese of Naxos, Andros, Tinos, and Mykonos) but has a history since the 13th century (as the Diocese of Naxos). It includes the Catholics of the islands of Naxos, Paros, Antiparos, Amorgos, Andros, Tinos, Dilos, and Tinos. It is claimed to be one of the most populous Archdioceses. Nowadays the seat is the Cathedral of Our Lady of Rosary in Tinos, which is also considered the Metropolis of the Aegean Islands.

-The church: The Cathedral of Our Lady of Rosary is located in the village of Xinara on Tinos Island. This small village was the capital of the island during the Venetian domination in Greece. Nowadays, all these picturesque, small houses, the old town hall, and a small museum are remnants of that period. The Cathedral Church is a traditional and typical sample of Venetian architecture with a yard full of trees and a bell tower. Summer is the perfect season for your wedding when the sun will brighten the inside of the church and become the perfect lighting for your wedding photos

Diocese of Chios - The Cathedral of St. Nicholas.

-The history: Diocese of Chios was established in the 13th century and is located on the island of Chios. It includes the islands of Chios, Mytilene, Samos, and the rest small islands of the Eastern Aegean Sea. The seat is the Cathedral of St. Nicholas in Chios. The Diocese of Chios is in the Ecclesiastical province of the Archdiocese of Naxos, Andros, Tinos, and Mykonos.

-The church: The Cathedral of St. Nicholas is located on Chios Island in a quiet location. It is a small, beautiful church ready to welcome you and your future spouse. The great gate outside the church and the covered-in-stone yard will contribute to the perfect wedding environment.

Diocese of Crete - The Cathedral of the Assumption.

-The history: Diocese of Crete has been originally established in 1204 when the Roman Catholic presence on the island became notable. After the Cretan War (1645-69) it was re-established in 1874. The seat is the Cathedral of the Assumption in the city of Chania. It is in the Ecclesiastical province of the Archdiocese of Naxos, Andros, Tinos, and Mykonos.

Diocese of Santorini - The Cathedral of St. John the Baptist.

-The history: This Diocese was established in 1204 and it is one of the most important dioceses of the Aegean Sea. It is located on the island of Santorini, an island of extreme beauty and the seat is the Cathedral of St. John the Baptist. The Diocese of Thira (as it is also known) is also in the Ecclesiastical province of the Archdiocese of Naxos, Andros, Tinos, and Mykonos.

-The church: The Cathedral of St. John the Baptist is a church of extreme beauty and amazing architecture. Located in Fira, it stands out for its size and bright colors. The exterior of the church is colored peach, the interior is lilac blue and the other parts are cream. The interior is also decorated with large religious portraits framed with pillars. The Cathedral of St. John the Baptist is located in a fantastic spot with an extraordinary view of the Aegean Sea. The beautiful mosaic path will lead the bride toward her loved one. It is described as an oasis of peace and grace on a heavenly island. This church is one of the best wedding options you could ever choose!

Diocese of Syros and Milos - The Cathedral of St. George.

-The church: The Cathedral of St. George is located in Ano Syros. This church was built on the top of a hill in order to have a view of the Aegean Sea. Inside the church, there are icons of great cultural and artistic icons, the icon of St. George, and the icon of the Virgin Mary. The blue domes, the white and stony stairs, and the view create fantastic wedding scenery.

Archdiocese of Corfu, Zante and Cefalonia - The Cathedral of St. James and St. Christopher.

-The history: This Archdiocese includes all the islands of the Ionian Sea. One of the most praiseworthy Catholic communities, Catholics of this Archdiocese has never caused any trouble in the relations between Greek Orthodox and Catholic Church. It is established in Corfu in 1310 (as the Diocese of Corfu) and later it was promoted to the Metropolitan Archdiocese of Corfu, Zakynthos, and Cefalonia. The seat is the Cathedral of St. James and St. Christopher in Corfu.

-The church: This temple is one of the oldest monuments on the island. After additional, constructional extensions, the Cathedral of St. James and St. Christopher is composed of three side chapels, a polygonal sanctuary, and an aisled wooden roof. The three chapels communicate with the main one with arched gates. It is located in a central location and in front of it there is a beautiful square. The façade of the church is accompanied by a bell steeple with pyramidal ends.

Apostolic Vicariate of Thessaloniki - The Cathedral of the Immaculate Conception

-The history: Apostolic Vicariate of Thessaloniki was established in 1926. It has been created in order to unite the provinces of Kavala, Xanthi, Alexandroupoli, Volos, Larisa, and Giannitsa. The seat of the Vicariate is the Cathedral of the Immaculate Conception in Thessaloniki and it is not officially recognized as an independent bishop.

-The church: The Cathedral of the Immaculate Conception is located in the city of Thessaloniki, Fragkon Street. This church was built for the residents of North Greece. The Cathedral of the Immaculate Conception’s great location and architecture will be the perfect wedding destination. The city of Thessaloniki is the second most populous city in Greece and has many interesting and beautiful monuments. White Tower and Thermaikos bay will be the ideal background for your wedding.

to plan your wedding in Greece

Hookah catering for your wedding in Greece

Give oriental spurge at your wedding with Hookah Greece Catering Service!   Do you want to give an ultimate oriental aesthetic to your Destination Wedding… 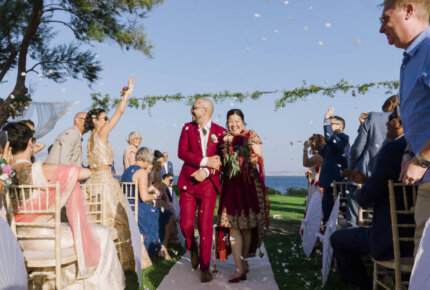 A Multicultural Wedding in Athens Riviera, Jazz and Maggie 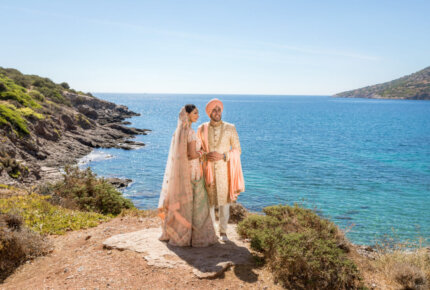 A blessed Sikh Wedding in Athens Riviera, Nick and Harpreet

A destination Sikh wedding in Athens Riviera Walking down the aisle towards a Greek Wedding Fairytale As professional wedding planners in Greece, we feel blessed…

The wedding planner is the specialist whose knowle

A destination wedding in Greece is a mixture of lu

How do you imagine the ideal wedding abroad? Is it