All about traditional Greek wedding - Wedding in Greece

If you are planning to travel to Greece to tie the knot, then you need to have an idea about the traditions that make Greek weddings so special world widely.

If you have watched the famous American movie “My big fat Greek wedding”, then you already have a small taste of the philosophy and customs that transpire a traditional Greek wedding. From the throwing of a kid on the new bed of the couple, till the squashing of the groom’s foot during the ceremony, every single tradition is absolutely existing and has a special meaning. In this tribute, we will give you a closer inspection of the most important traditional proceedings that take place before, during, and even after the sacred ceremony of a common Greek wedding, and their inmost symbolism's.

When and where traditional Greek Weddings happen

The official religion of Greece is the Orthodoxy. Therefore, a traditional religious Greek Orthodox wedding usually takes place in a Greek Orthodox Church or in a small chapel.

A weekend- when almost no one works the following day- is typically the best time to have a Greek wedding. However, orthodox weddings do not take place during the Lent, on a holy day or during fasting periods. Unlike the modern-day weddings that most of us are accustomed to thanks to the classic movies, vows are not exchanged between the couple, because the ceremony is symbolic of a spiritual union of two people in love, and not a contract.

What happens at a Greek wedding: Before the wedding

When a Greek couple decides to get engaged, they exchange rings as a commitment to get married in the near future in front of their close family and friends, forming a small celebration of their upcoming united life.

A few days before the wedding, the so-called “making of the bed” takes place. During this small pre-wedding celebration, all the relatives and single friends of the groom and the bride are invited to the couple’s new home. After the making of the bed with brand-new sheets is completed by the single women of the house, the mother-in-law checks that everything is perfect and then money is offered by the attendants for the first expenses of the couple. If there is a baby in the house, then somebody needs to lay it on the bed thus proclaiming the sex of the first of the couple’s first child.

During the preparation time on the official wedding day, the bride and the groom are getting dressed at different houses, accompanied by their best friends. The bride writes all the names of her best unmarried friends under her wedding shoes. The ones that are eventually erased at the end of the day, are the ones that are about to get married next. On the other hand, the best friends of the groom are shaving him for the last time before the wedding ceremony.

In some specific regions, tradition has it that the groom or the bride are accompanied on foot from their home to the church by relatives and a traditional band. All the way to the church, local traditional songs and instruments are sounding and people are singing along till they reach the church.

On the other hand, when arriving to the church by car, the bride has to drive around the church three times, while tooting, proclaiming the upcoming wedding event.

What happens at a Greek Wedding: during the Wedding Ceremony

During the wedding ceremony, the best man and the maid of honor exchange the rings three times and then the crowns (“stefana”), also three times, over the heads of the couple. The crowns are then joined with a white ribbon to symbolize unity. The closest relatives stand around the couple, while the groom and the bride need to have their right hands united throughout the whole ceremony.

When the cantors read the Apostle, at the point where they say, "may the female be scared by the man," the groom secretly presses the bride's foot, but sometimes the bride is well-prepared and steps on the groom’s foot first. At this point, the guests focus on the feet of the couple to see who will lead the move! During the “dance of Isaiah”, where the couple walks around a table along with the Priest, the guests are hurling rice towards them, thus symbolizing the “rooting” of a newly united life, and their first steps together, with the guidance of the orthodox church.

Towards the end of the ceremony, the priest gives to each of the couple a sip of red wine from the same glass. The remaining wine of the glass is drunk by the best man or the maid of honor when the ceremony is over.

What happens at a Greek Wedding: the Closing of the Ceremony.

At the conclusion of the ceremony, the entire procession and guests get outside the church and make a line for the official wishes to the couple and then pose for professional photos. Each of the guests receive a bonbonniere with candies called “koufeta”, where the number should be single, usually 3, five or seven, symbolizing that the couple can never be divided.

After the wedding is over, the groom's mother waits for the couple at their new home, giving each one of them to eat a traditional Greek sweet on a spoon, so as to enjoy a sweet life together!

After the ceremony, all the guests head towards the wedding hall where they enjoy the wedding dinner and a wild wedding party. The arrival of the couple takes place in a festive atmosphere, and the party starts with a special, usually extra-romantic first dance, in the rhythm of the couple’s favorite love song. The groom and the bride stand in the middle of the reception hall and cut the wedding cake together.  Then, the person in charge of the reception hall opens a bottle of Champaign and the couple clings glasses with each other and thanks the guests for their presence while wishing them a joyful night.

The guests enjoy every kind of Greek delicacies, while listening to the music that has been chosen in advance by the couple. When the party is on fire, the bride usually leads the traditional Greek dances and invites the guests to dance. It is not abnormal to see guests throwing flowers at her while she is dancing the traditional Greek belly dance called “tsifteteli”, while plates are being traditionally smashed when the groom is dancing “zeimbekiko”.

During the party, there is one point when the music stops and the bride calls all the single ladies on the dance floor and throws her bouquet towards them! The lucky one who catches it, is the next in line to get married.

Do you want to organize your dream wedding in Greece and experience all the authentic Greek wedding traditions? Contact our experienced wedding planning team now. 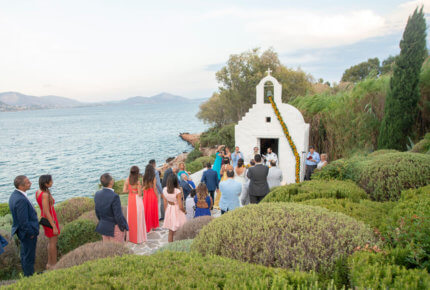 A heartwarming wedding in Athens, Greece 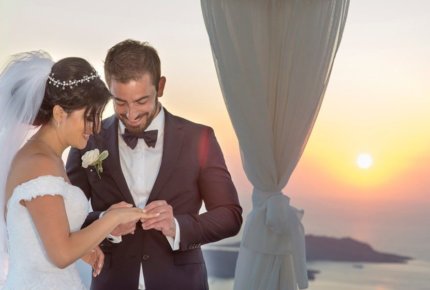 to plan your wedding in Greece

The remarkable love story of Sophia and Adam was b

I'm so excited to announce that Wedding in Greece

Mykonos, the Greek island known for its picturesqu